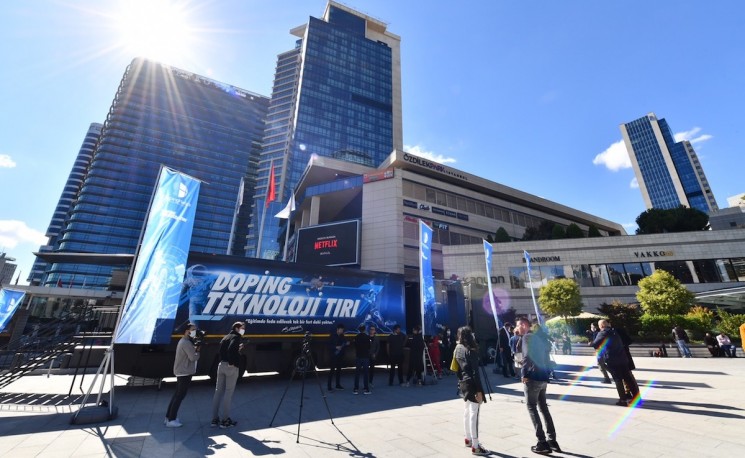 Designed by the educational platform Doping Technology, mobile science lab hopes to reach 60,000 children in remote parts of Turkey by end of next year.

Doping Technology, a next-generation online educational platform, will dispatch a state-of-the-art “technology truck” across Turkey with the aim of promoting science and technology among the nation’s children. The mobile science lab began its countrywide journey on October 10 from Adiyaman located in the southeastern part of the country.

Adopting a thoroughly ‘hands-on’ approach, the project hopes to reach 15,000 children by the end of this year, and another 45,000 throughout 2022. “We want to introduce children with limited opportunities, especially those in small villages and remote areas, to the exciting – and rapidly-evolving – world of technology,” Doping Technology CEO Semih Hakyemez says.

‘Scientists, Researchers, Engineers of the Future’

Designed by a team of 250 specialists, the truck bristles with cutting-edge technology, including VR headsets, 3D printers and unmanned drones. It also contains several landmark scientific devices, such as a Tesla coil, a Van de Graaff generator and a Stirling engine.
Hakyemez also stresses, however, that the project is about more than just hard science. “We also want to appeal to children’s artistic and creative impulses,” he explains. “For this reason, every child that takes part in the initiative also receives their own chess set and musical instrument.”

Atatürk: ‘No Child Should Be Deprived of an Education in our whole nation’

Doping Technology was established ten years ago with the aim of promoting an “innovative learning culture” in Turkey. “Our vision is to become a global technology company that can enrich young people’s lives through modern approaches to education,” Hakyemez explains.

“This vision also shapes our approach to social responsibility,” he adds, quoting Mustafa Kemal Atatürk – the founder of the modern Turkish nation – who once said: “No child should ever be deprived of an education in our whole nation.”

Ömer Karakuş, head designer of the truck, also stressed the importance of preparing the next generation to compete in an increasingly tech-dependent world. “The Doping Tech Truck is intended to broaden children’s horizons and inspire those will ultimately shape Turkey's future. We do all this in the firm conviction that our children will be the scientists, researchers and engineers of the future,” he says.