ALL
GENERAL
ECONOMY
ARTS-CULTURE
TECHNOLOGY
HEALTH/SPORTS
The novel ” Abraham Geçmiş Değişir " by Eda Gökçeli, was selected as the ”Author of the Year" at the Golden Palm Awards 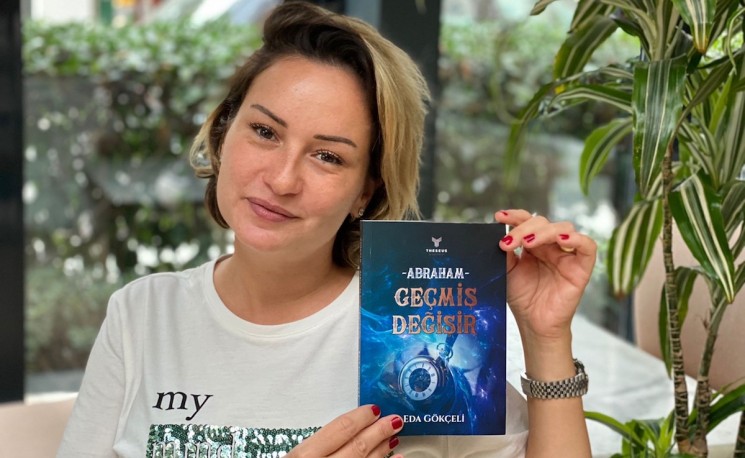 According to the author Eda Gökçeli, Her novel “Abraham Changes the Past”, which won the VII.“Author of the Year” award at the Golden Palm Awards, takes readers on a time journey outside the usual stories. Gökçeli draws attention to the transformative effects of time and people in life with her book, in which he tells the story of Olivia, who had no choice but to reach Abraham Salwatowski in order to escape from Hitler's Germany of 1933 from 2020.

ISTANBUL (TR) - According to the author Eda Gökçeli, The novel “Abraham-Geçmiş Değişir”, which got the award for the “Writer of the Year” within the framework of the VII. Golden Palm Awards, deals with the periods when the paths of people living in different time lines intersect. In the novel, Olivia tells the story of the struggle to find the famous physicist Abraham Salwatowski, who was living there after Olivia found herself in Germany in 1933, boarding the ship from England to America to escape the Holocaust. The adventure extends to Istanbul Cevahir Bedesten in 2026. Award-winning Author said: "Olivia had no choice but to find the physicist famous for her time travel project to return to the present. She saw Salwatowski as the only way back to the present. Abraham Salwatowski developed his most productive projects when he immigrated to America before the Second World War. If he had not died in a plane crash, his projects would not have remained in theory. The possibility of Olivia returning to her own timeline depended on reaching out to Abraham Salwatowski.”

Describes "Hitler's Germany" through the eyes of women

The novel, which took its place on the shelves through Theseus Publishing House, begins with the protagonist of the book, Olivia, finding herself in Germany of the Hitler era via a smartphone. Stating that her novel deals with Hitler's Germany, which is depicted with war scenes in many works, with its sociological elements, Writer Eda Gökçeli said, "With the Reform that took place in 1933 when Hitler came to power, women's employment was restricted. Non-German women were excluded from social life. In my book, I also talk about the oppressive attitude of Hitler's Germany on women.”

The impasse of technological impossibilities

Stating that technological impossibilities made it difficult for Olivia to search for the famous physicist in her book, Gökçeli said, “In addition to the social pressure on Olivia, she experienced great difficulties with technological impossibilities. It was almost 70 years ago, from an era dominated by smart technologies. She was stranded in a country where she did not speak the language and in a time period to which she did not belong. She was having a hard time making a living because women's work was restricted. To reach Abraham, he had to go from Germany to America. She had neither money nor an ID.”

A busy journey with different stops

Pointing out that Olivia's time travel, which starts from Germany, uses the stops in America, England and Istanbul Cevahir Bedesten for different purposes in her novel, Gökçeli explained the issue with these words: "Germany is the country where Olivia finds her identity again and saves money despite all kinds of impossibilities. There, thanks to her friendship with a woman of Jewish origin, she got her ticket to America. England was the guide for the transition to America. Olivia's goal was to go to America and reach Abraham. But things took a turn for the worse when she met a man while on a cruise in England. It was believed that there was an interdimensional tunnel in Istanbul Cevahir Bedesten, so that Olivia's adventure leading to Turkey would have new challenges.”

“My dream to have Johnny Depp play ABRAHAM”

In 2019, Gökçeli deciphered the therapeutic effects of 2026 technologies, especially on health, in her novel, which she created during a visit to Albert Einstein's summer house in Berlin, although it contains time travel from the past to the present, between the lines. “If my novel becomes the subject of a movie one day, it would be quite exciting for me to have Johnny Depp play Abraham,” Gökçeli added.