ALL
GENERAL
ECONOMY
ARTS-CULTURE
TECHNOLOGY
HEALTH/SPORTS
Daikin celebrates its 10th year in Turkey with growth records: it has grown 11 times in 10 years 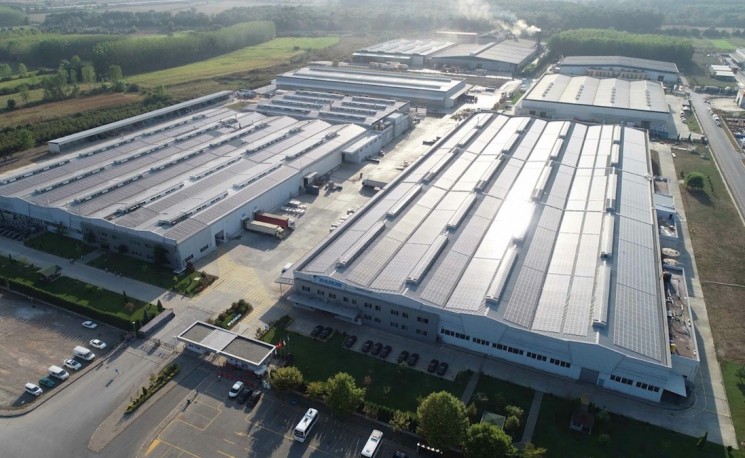 Japanese giant Daikin, which entered the Turkish air conditioning Sunday by purchasing the Airfel brand in 2011, once again showed that it is one of the most important players in the sector by showing 11 times the growth success in 10 years. Daikin Turkey, which produces a wide range of products at its factory in Sakarya Hendek, has invested $ 350 million with its total Airfel acquisition to date. The company's next goal is to invest another $ 150 million by 2025 to complete the total amount of investment to $ 500 million.

ISTANBUL (TR) - Daikin, the global giant of the air conditioning sector, is celebrating its 10th year in Turkey with new investments and high growth figures. Sundays July 2011, the Company entered the Turkish market with its direct investor identity and started its operations under the name Daikin Turkey, since then it has shown 11 times the growth success in 10 years, demonstrating a growth performance well above the average in the sector. Daikin Turkey, which had a turnover of 202 million TL when it started its operations in Turkey in 2011, has been successful well above the sector average of 10 percent, following an aggressive growth strategy since then. Daikin Turkey, which continued its growth despite the fact that the entire sector was expected to contract by 25 percent during the pandemic period, managed to increase its turnover to TL 2 billion 836 million at the end of the 2020 financial year, growing by 42 percent compared to the previous year. Daikin Turkey, which also registered its growth with the most important research results of the country, has risen 23 steps by 2020 in the “survey of 500 large industrial enterprises of Turkey”prepared by the Istanbul Chamber of Industry (ISO) and has taken 152nd place. With this success, the company has retained its title of being the top 100 company in Turkey as the 57th in equity size. Daikin Turkey, which has believed in the power of innovation and R & D since it started its activities, continued its investments in this field decisively. ‘R & D 250’ prepared by Turkishtime, Turkey's most R & D spending companies in the research 18 decks more than one increase in 111th place decked out in this effort has paid off.

Dec Sunda,which is growing with R & D and innovation, produces products of Daikin and Airfel brands suitable for different needs such as combi, air conditioning units, fancoil, air conditioning plants with the latest technology in its production facilities located on an area of 100 thousand square meters in Sakarya Hendek; it carries the power it receives from production to exports as well as the domestic Sunday. Daikin Turkey, which receives 55 percent of its turnover from export inputs, reached an export figure of 200 million dollars in 2020, providing a 28 percent increase in export revenues compared to the previous year. Daikin Turkey set its export target for the 2021 fiscal year as 300 million dollars.

Daikin Turkey, which has the widest product range in Turkey in the field of heating, cooling and ventilation, sets the standards of the sector with its technology and makes a difference with its environmental approach. ” Value to man, starts from the environment " by referencing the motto of every step of the net zero carbon emission target acting, Daikin 2020 in July in Sakarya Hendek District factory for the GES project has invested 3 million dollars. Aiming to produce 5,760 kWp of power in its factory with this project, the company provided 80 percent of its factory's energy with the GES project. Daikin, which set out with the goal of becoming a Yesil factory, was able to reduce the emission of carbon dioxide equivalent to 90 thousand trees by 4 thousand 186 tons per year thanks to this project.

Daikin Turkey R & D department, which had a team of 21 people and a budget of 400 thousand euros when it was established in 2011, today represents a large structure that has increased the number of employees by 3.5 decks and its budget by 5 times. The R & D center also holds the title of the fastest growing subsidiary R & D of Daikin Europe R & D with a budget of 70 million euros with this volume.Dec. Dec. Dec. Dec October Turkey R & D aims to increase 20 percent growth for 2021, as well as to invest 10 million euros by the end of 2025 and increase its employment to 100 people. Daikin Turkey, which spent 2 million 500 thousand euros on R & D last year, continues to increase its R & D budget and also invests in laboratories in the same amount.Dec. Dec. It employs a total of 70 people in the R & D center, where 65 Turkish and 5 Japanese engineers work.Dec. Daikin Turkey, which has successfully written its name to the world air conditioning sector with its air conditioning, combi, fancoil and air handling units developed in Turkey, continues its journey of research and development of new products in its R & D center decisively. The company is the recipient of international awards such as RedDot, IF Design, as well as the Excellent Product Award within Daikin Global for its successful R & Dec work, especially in heating products.

Daikin Turkey, which has accelerated its activities in the sector with 5 investments of 53 million dollars that it will spend in 2021, will have made a total investment of 100 million dollars to date. The company's next goal is to invest another $ 150 million by 2025.

WHAT WILL HAPPEN IN THE FUTURE?

Daikin Turkey's 10-year period Daikin Turkey CEO Hasan Önder evaluating R & D and factory straight noting that lasted for investments said: “in 2011, entered the Turkish market by purchasing airfel Daikin, since then, the industry was able to grow 11 times in 10 years by showing above-average growth. R & D is an important issue that is one of the building blocks of our corporate culture Dec. The future is already here. By constantly moving the budget of our R & D investments higher, we have created a R & D center at a level that will produce our own patents and have started to get very good results.Dec. Dec. We follow the trends that will affect HVAC companies in the near future, and accordingly we set goals and direct our work. In the coming period, Smart Cities, Energy digitalization, big data, blockchain, decentralization, storage, and electric vehicles as the main topics that will determine the dynamics of the sector emerges. Daikin Turkey also continues its work by taking positions according to these parameters.”

GENERAL
It is now possible to rise a generation with professions which artificial intellegance can’t replace!

GENERAL
Only one out of every 3 experienced traders finds their level of knowledge sufficient!

GENERAL
Univera ranks among the world's best in retail technologies for the 5th time
Copyright © 2016 - 2021 Unusual Enterprise BV
B2Press
Sending...
B2Press
We use cookies to give you the best experience on our website. You can change your settings at any time. Otherwise, we’ll assume you’re OK to continue.
ContinueGet Information