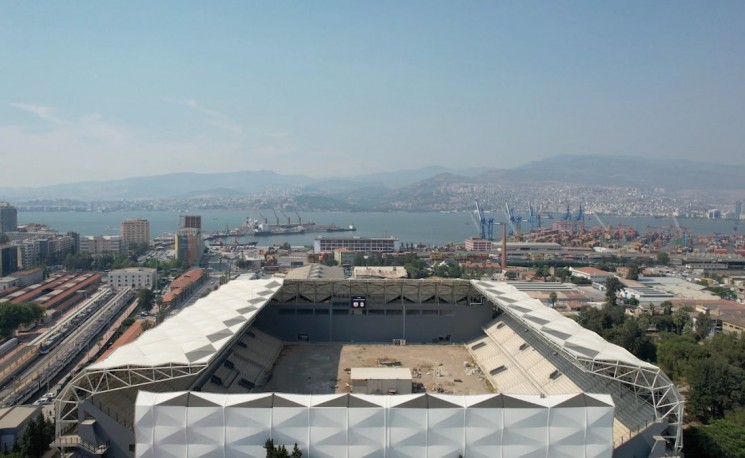 Izmir Alsancak Stadium is preparing to open its doors in the new season.

İSTANBUL (TR) - Izmir Alsancak Stadium, which dates back to 1910s and was demolished in 2015 and reconstructed by the T.C. Ministry of Youth and Sports, is getting ready to open its doors in the new season. The new stadium with a capacity of 15 thousand people has 10 sky boxes, 4 locker rooms, 2 referee and 4 trainer rooms, as well as UEFA offices, a multi-purpose hall for 100 people, in addition to food and beverage areas. Altay, one of the Izmir teams that ended his longing since 2003 by making it to the Super League this year, is expected to play in the renewed Izmir Alsancak Stadium next season. Altınordu, which serves Turkish football with the motto "Good Individual, Good Citizen, Good Football Player", plans to play TFF 1st League matches in the renovated stadium next season. Making a statement on the subject, Altınordu Deputy Chairman Barış Orhunbilge said, “The relationship between Altınordu and Altay teams, which have the rights to use the stadium, is a unique indicator of a unique friendship for the whole football world. Especially for Altınordu, who dedicates himself to training football players for national teams, the renewed İzmir Alsancak Stadium is of great importance. The fact that Altınordu, which attracts the attention of the football world and is also known as Turkey's football factory, plays its matches in the renovated İzmir Alsancak Stadium will make a very important contribution to the viewing experience and the prestige of Turkish football."

Referring to the history of the stadium, Orhunbilge underlined that it has hosted many matches from past to present: “It is said that the history of İzmir Alsancak Stadium dates back to 1910. In those days, the Greek Cypriot team Panionios played their matches in this stadium. After the War of Independence, primarily Altınordu and Altay, Göztepe, Karşıyaka and İzmirspor teams started to play their matches in İzmir Alsancak Stadium.

In 1959, when the Turkish Football 1st League started, 5 teams of İzmir played their matches in this stadium. In 1962, a protocol was signed between the then-Prime Ministry General Directorate of Physical Education and Altınordu and Altay, and the usufruct rights of the stadium were transferred to Altınordu and Altay. In return for this, Altınordu gave the field where the current Atatürk Indoor Sports Hall and Atatürk Swimming Pool are located to the Prime Ministry General Directorate of Physical Education for the 1971 Mediterranean Games to be held. Since then, İzmir Alsancak Stadium has been used together by Altay and Altınordu clubs.”

Izmir teams became the address of the European challenge

Reminding people that football came to Turkey in the last quarter of the 19th century and that the first football team was founded by the British in İzmir in 1894, Orhunbilge said, “With the effect of football fever that spread from İzmir to the whole country at that time, Turkish teams played one after another in İzmir in the first years of the Republic. The clubs of Karşıyaka, Altay, Altınordu, İzmirspor, Göztepe and Bucaspor, dating back to that period, have made great contributions to Turkish football. İzmir Alsancak Stadium hosted the matches of İzmir teams especially during the European Cup struggles.”