ALL
GENERAL
ECONOMY
ARTS-CULTURE
TECHNOLOGY
HEALTH/SPORTS
79% of e-commerce initiatives have increased revenues in the last year! 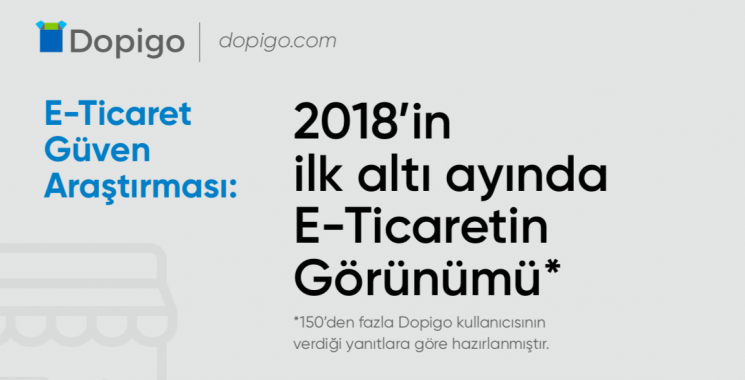 According to the ında E-Commerce Appearance Survey, that Dopigo carried out for the second time in which economic indicators varied and were closely monitored, half of the entrepreneurs who increased their incomes in the first 6 months of 2018 were the main concern of the rest of the year. On the other hand, 87% of global e-commerce giant Amazon's participants anxiously await the arrival of our country, he says he wants to open up shop in the Amazon or Turkey.

ISTANBUL (TR) - Dopigo, the cloud-based e-commerce solution that enables entrepreneurs to manage their e-commerce operations from a single point, announced the results of the t E-Commerce Appearance Survey taban for the second time with the participation of more than 150 e-commerce entrepreneurs. 83% of the information received from entrepreneurs participating in e-commerce in the last 5 years; the performance of the sector in the first 6 months of 2018 and the commercial expectations for the rest of the year.

79% of e-commerce initiatives increased their revenues compared to last year.

Dopigo asked the participants to evaluate their investments in the past 6 months when economic risks increased. In the first half of 2018, 76% of e-commerce entrepreneurs went through growth by using new sales channels, 54% by finding new product ideas, 24% by investing in office, store and warehouse and the rest by new technology purchases. Compared to 2017 data; There was a significant contraction in new technology acquisitions and recruiting new employees. Considering the return of investments; 40% of entrepreneurs said that they had made less than their investment, 28% had more than double the investment, and 7.4% had more than 5 times their earnings.

Approximately 55% of respondents said that in the first 6 months of 2018, the average activity size in e-commerce increased by more than 10%. 80% of entrepreneurs expect an increase in e-commerce activities in the next 6 months despite all economic conditions.

Participants stated that the biggest risk expected for the second half of 2018 is an increase of 50% in exchange rates. As a result, the cargo costs are rising and the high inflation rates are concerned. The lowest risk is 3.6% of the respondents, which is seen as a decrease in e-commerce expenditures of the customers.

The advent of Amazon creates excitement

More than half of the entrepreneurs participating in the research are online markets, 26% websites and 13% sells through physical stores. n11, GittiGidiyor, Hepsiburada 47% of the participants who sell online market places have their own unique e-commerce site.

Amazon, which will enter Turkey as a strong player in the e-commerce market, was excited by SMEs in e-commerce. Being in the Amazon means a global e-commerce experience. 87% of e-commerce entrepreneurs to sell abroad 90%, he said he wanted to open up shop in the Amazon or Turkey. At present, 10% of Amazon'dan sales, while 75% of the foreign operations is open to ideas expressed.

Dopigo is a SaaS (Software as a Service) solution that enables all e-commerce entrepreneurs, especially companies, to manage their e-commerce operations through their markets and internet sites from a single point. Supported by KWORKS, Koç University Entrepreneurship Research Center, Dopigo regularly publishes igo E-Commerce View Survey ’by measuring the confidence and sectoral expectations in the e-commerce sector with the data received from more than 150 users.