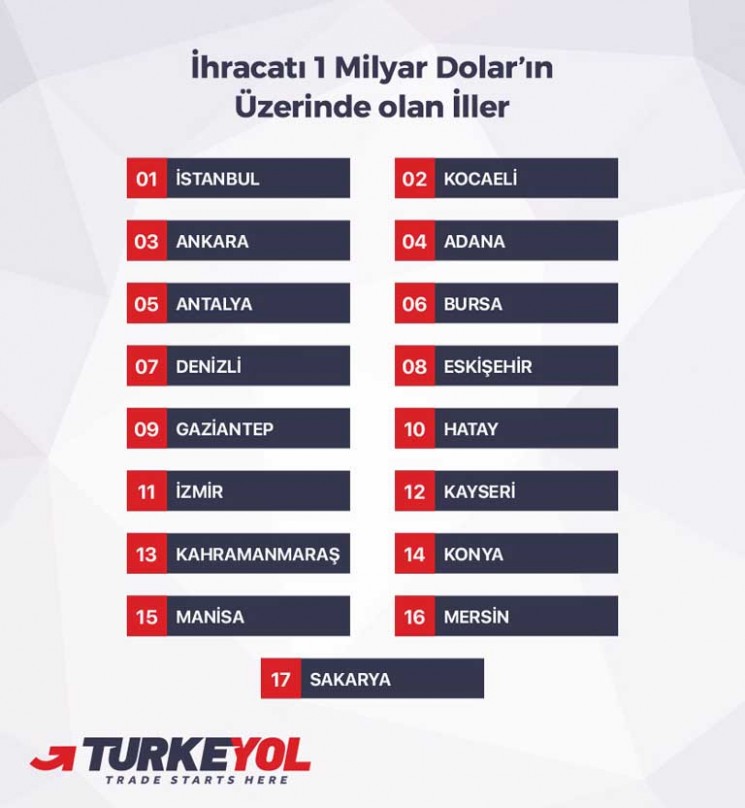 Foreign trade deficit decreased by 28% in Turkey in 2018 fell to $ 55 billion. While 56 cities gave export surplus, 17 provinces exceeded the level of 1 billion dollars in exports.​

“The foreign trade deficit will decrease rapidly with e-export.”

In 2018, the most export was made from Istanbul with 85 billion dollars, second place was Bursa with 11 billion dollars and Kocaeli with third place was 8 billion dollars. Other provinces that exceeded 1 billion dollars in exports were Adana, Antalya, Ankara, Denizli, Eskisehir, Gaziantep, Hatay, Izmir, Kayseri, Konya, Manisa, Mersin, Sakarya and Tekirdag. Yusuf Yeniturkogullari, the founder of Turkeyol, said,% The increase in the number of provinces with export surplus by 10% in the last 3 years is the biggest indicator of the fact that the production-weighted economy is developing in our country. We believe that the foreign trade deficit will diminish rapidly by the SMEs in Anatolia, especially in the direction of e-export. Anad

The largest increase in exports took place in the Netherlands

Only wholesale B2B trade platform focusing on Turkey Turkeyol from abroad, to inform SMEs and giving direction to the country's exports in order to give direction to the e-Turkey export steps was compiled. Total export value increased 7.1% to 168 billion dollars in rising Turkey, 57% of export to Europe, 25% Asian, 7.8% were realized to the United States and 7.9% in African countries. Turkey's exports in 2018 his country was Germany with 16 billion dollars. Exports to Germany increased by 7% compared to the previous year. The second most exported country was the UK with a 15% increase. England, Italy, Iraq and the United States followed the volume reaching $ 11 billion. In 2018, the largest increase in Turkey's exports to 10 countries, have been living in the Netherlands reached $ 4.7 billion in export volume by 23%.

Turkey Exporters Assembly (TIM) data, according to the most exported products made in Turkey in 2018 was automotive group. In the automotive sector, an increase of 11.8% compared to the previous year, total exports reached 26 billion 759 million dollars. Machinery industry, which ranked second in exports, increased by 14.5% and exceeded 15 billion dollars. The biggest breakthrough in exports in the past year was the 40.6% increase in iron and steel. The third largest export item was iron and steel exports, followed by textile and jewelery exports.