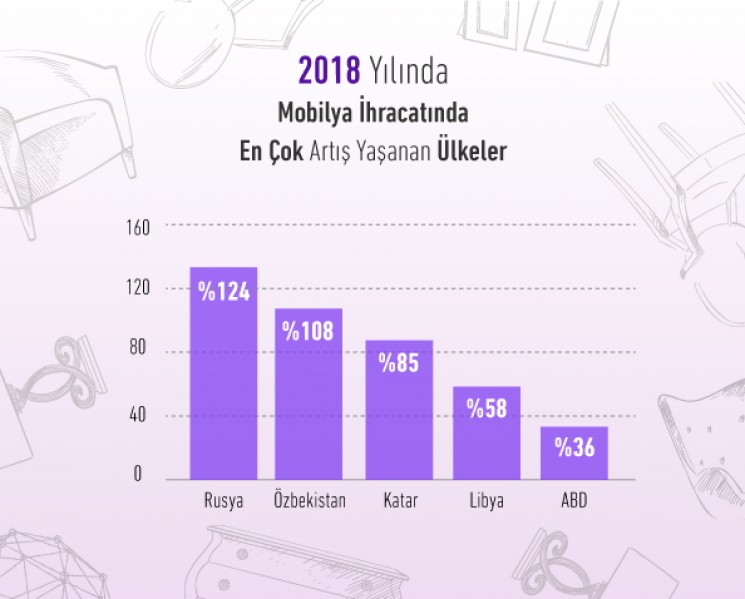 Furniture export rose up to USD 3 billion 131 million with a 13% increase in the year of 2018. While furniture export to 32 countries out of 187 exceeded the 20-million-dollar limit, the demand growth in the countries where Turkish series are being aired drew attention.

ISTANBUL (TR) - According to TurkStat data, furniture exportation went up to USD 3 billion 131 million in 2018, with a 13% increase compared to the previous year. Iraq took the lead in export as in previous years while the biggest increase in furniture exportation took place to Russia. According to the data compiled by Asortie Mobilya, Turkish TV series being broadcasted abroad contribute to the furniture export. Especially, the classical, avant-garde and luxury furniture featured in the historical and period series attract audience's attention. Highlighting that in addition to Russia, Middle East and South American countries where Turkish series are being exported to recorded a rapid increase also in furniture export, Murat Erat, Chairman, Asortie Mobilya said: "Furniture export is expected to reach USD 3.5 billion in 2023 as the promotion of local furniture continues."

"Rise in the furniture export is striking to the countries where Turkish series are popular."

Of the Middle Eastern countries, Turkish TV series are immensely popular in; the United Arab Emirates is where furniture exportation increased by 13%. 24%, 28%, and 34% increase took place for Israel, Oman, and Kuwait, respectively. Among the South American countries where enthusiasm about Turkish series is going big with each passing day, Brazil, Uruguay, Chile, and Argentina recorded an increase of 38%, 52%, 83%, and 234%, respectively. Mentioning the contributory aspect of Turkish series for the furniture export, Murat Erat, Chairman, Asortie Mobilya, said "In particular, classical and avant-garde furniture featuring in historical series attracts great attention. This effect has been evident recently in Middle Eastern and South American countries as well as in Russia. After a Turkish series aired in Russia, a high demand took place for our furniture. We believe that domestic series have a part in the export increase to Russia, where furniture exportation of USD 31 million in 2017 went up to USD 69 million with 124% increase."

32 out of 187 countries where furniture was exported to in 2018 exceeded the USD 20 million limit. Iraq became the top receiving country while Germany ranked second, France ranked third, Saudi Arabia ranked fourth, and US ranked fifth with USD 458 million, USD 219 million, USD 197 million, USD 183 million and USD 124 million, respectively. Russia became the country where furniture export increased the best in 2018 with an increase of 124%. Uzbekistan ranked second, Qatar ranked third, Libya ranked fourth, and the US ranked fifth with respect to the increase in furniture export by 108%, 85%, 58%, and 36%, respectively.