ALL
GENERAL
ECONOMY
ARTS-CULTURE
TECHNOLOGY
HEALTH/SPORTS
Turkey has completed the first phase of the pandemic: The amount spent on diagnosis and treatment of COVID-19 patients exceeded 600 million TL 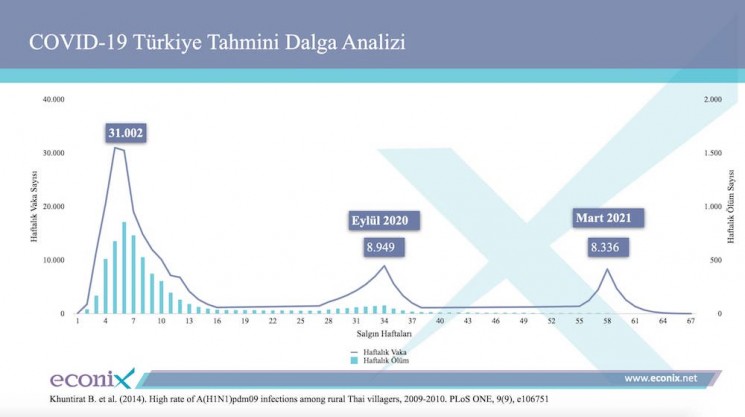 ISTANBUL (TR) - The struggle of the world against the novel coronavirus pandemic continues without slowing down. South America became the new center of the pandemic, and Turkey, which has implemented all necessary measures such as social isolation, curfew and border closure since the first case was seen, managed to put the first wave behind according to experts.

Econix Research, which develops scientific methods to predict the course of the COVID-19 pandemic in Turkey, has announced a new report after following the 4 different pandemic scenarios in March and April. The report, titled “COVID-19 analysis in the world and Turkey”, points out the total treatment and care costs of patients with the novel coronavirus detected in Turkey, while the number of patients not yet diagnosed is estimated to be over 1 million. The first wave of the pandemic has been left behind, while the second and third waves are expected to be milder.

In the report prepared with the data that covers the months of March, April and May, based on the COVID-19 treatment manual published by the T.C Ministry of Health and the opinions of working experts, Turkey's patient management costs were analyzed. According to the data obtained from expert opinions within the scope of the analysis, the total expenditure for the care of patients diagnosed with COVID-19 in Turkey was estimated to be 623 million 412 thousand 232 TL.

Looking at cost breaks, the most expenditure was for the care of COVID-19 patients who received inpatient treatment with 234 million TL. Another of the services that were spent the most was the examination procedures of citizens who were tested with 210 million TL but did not receive a diagnosis. It was followed by the treatment and care expenses of patients treated in intensive care due to the pandemic with 135 million TL, while the lowest expenditure was for the outpatients COVID-19 patients with 45 million TL.

In the report, besides health expenditures, it was stated that a serious budget was allocated to the state support packages announced for COVID-19. The size of the stimulus package relative to GDP in Turkey recorded 2.5%, 5%, the ratio in the United Kingdom, 10.3% in Germany, while in the United States emerges as 13%.

It is estimated that there are 1.2 million patients with undiagnosed

In the analysis made by Econix Research based on published data and models, as a result of the evaluations made according to hospital applications and test rates, it was determined that the diagnosed patients could constitute 13.53% of all patients, including potentially undiagnosed patients. In this context, as of June 2, 2020 it stated that Turkey may have 1.223.070 million undiagnosed patients with COVID-19.

Also, located in the analysis report released in April of the current table in Econix, it noted that Turkey remained similar to the 2 scenarios. It is expected that the stagnation after 110,000 cases envisaged in the mentioned scenario took place in April - May, and the total number of patients diagnosed at the end of June is 180,000 and the probable death number is over 5,000.

The second wave can be observed in mid-September, the third wave in May 2021

According to the report, given the decline in the weekly number of new cases in Turkey is about to end the first wave but also envisions experienced in the world of virus outbreaks and Turkey's rapid spread shown by the COVID-19 virus move to the second and pitfalls of the third wave.

While the second wave is expected to start in September and reach its peak in October, it is estimated that the number of patients will remain around 25% of the number of cases in the first wave. The third wave is said to start in March 2021 and last until mid-April. With the end of the second and third waves, which are not expected to be as intense as the first wave, the number of deaths is expected to decrease gradually and as of May 2021 no new deaths are expected. It is also highlighted that this process can be better if social donation is achieved with a possible vaccination.

The health system is prepared for new waves

Stating that Turkey had achieved a very good success in the battle against the coronavirus and pointed out that a strong infrastructure was created for the projected new waves, Dr. Güvenc Koçkaya said: “Today, in our previous studies we predicted for Turkey and we predicted that there will be more than 180,000 cases by the end of June 2. we are faced with a picture that is close to the script but is much better viewed. The deaths are far below our estimates. This reveals the success of our health care system. We may September 2020 and May 2021 have a health system ready to successfully manage the projected waves with our new hospitals, which are opened to meet the needs and the rapid adaptation that we have shown at the point of treatment. But we must remember that total deaths continue to increase along with case numbers. As a matter of fact, the worldwide case mortality rate is recorded as 6.2%, while Europe ranks first with 9.01%. Therefore, while the risk is still at our side, it is vital not to abandon measures and not compromise social distance and hygiene rules even if restrictions are lifted”

South America, the new center of the pandemic, shifts the balance

The report says that the course of the oandemic around the world is that large fluctuations have been left, and monthly deaths have shown a decreasing trend, although the number of new cases continues to increase. Increasing cases in South America, however, seriously affect the balances of the global course. While there is a significant decrease in the number of new cases daily in North America and European countries in May, it is stated that the number of deaths observed in South America crossed the Asian continent in the last week of May and ranked first. Looking at the ratio of deaths to the total case, the European continent is still above the world average.